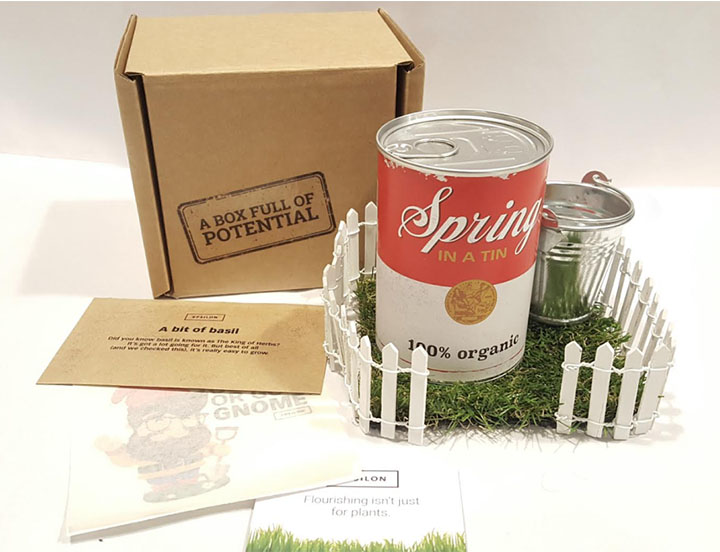 Spring in a tin for Epsilon's clients

Spring in a tin for Epsilon's clients

In 2016 Epsilon sent their clients at Google a Direct Mail that championed originality, inspired creativity, and won an award. In 2017, it was time for a new creative mailing.

Google was agency Epsilon’s single most important client. To keep the relationship sweet, Epsilon had sent them a gingerbread mailing in 2016, which had sparked plenty of good-natured conversations and had even won an award. They wanted to follow up with another piece in 2017 that would bring some fun to their Google clients’ busy working lives.

Both existing and potential clients were mailed ‘A Box Full of Potential’. It housed all the ingredients to create a rustic desktop garden, including grass, a watering can, a pot, soil and basil seeds. And of course, a hipster gnome decal that the Googlers could stick on their laptops. There was a real insight behind the idea, springing from the fact that research had shown how nurturing plants in the office boosted well-being. But the metaphor, of course, was that Google and Epsilon together could not only grow stronger as a partnership but grow each other’s businesses.

Within Google, competitions sprang up between the teams to grow the best crops of basil, making the mailing the talking point of the floor. On a more serious note, it also helped Epsilon take a step towards being recognised for creativity and originality. The desk gardens continued to grow and the gnomes appeared on laptops around Google, letting Epsilon’s name live on long after the last basil leaf.

Most businesses, ad agencies included, spend large sums of money on acquiring new clients but relatively little on retaining them. Just read the trade press and you’ll see that business worth hundreds of millions of euros switches shop every month.

Googlers are people too and people, by and large, respond well to ideas that involve and engage whether they be analogue or digital.